9 of Following Are on Rotation Daily


- Gelato is the Italian version of ice cream with a few key differences that make it a healthier alternative with a more dense and milky texture that's less creamy than ice cream.

- Less fat than ice cream: ice creams are heavy on the cream, and have a fat content, by American labeling law, of at least 10% (considerably higher in most homemade and many premium versions). Gelato, by comparison, uses more milk than cream, so it doesn't have nearly as much fat (five to seven percent fat) Additionally, it usually uses fewer (to the point of none) egg yolks, another source of fat in custard-based ice creams.

- Rich taste in gelato is due to less air churned into it during the freezing process. American-style ice creams are churned fast and hard to whip in plenty of air. Gelato contains about 25 to 30 percent air. Commercial ice creams can run from 50% to over 90% air, which gives them a light, thin, fast-melting texture. Gelato is churned at a much slower speed, which introduces less air into the base. That's why it tastes denser than ice cream— it is.

- Both gelato and ice cream are an effective source of calcium, ranging from 13 to 15 percent of your daily calcium requirements and Protein levels of about 2 to 4 g per half-cup serving. 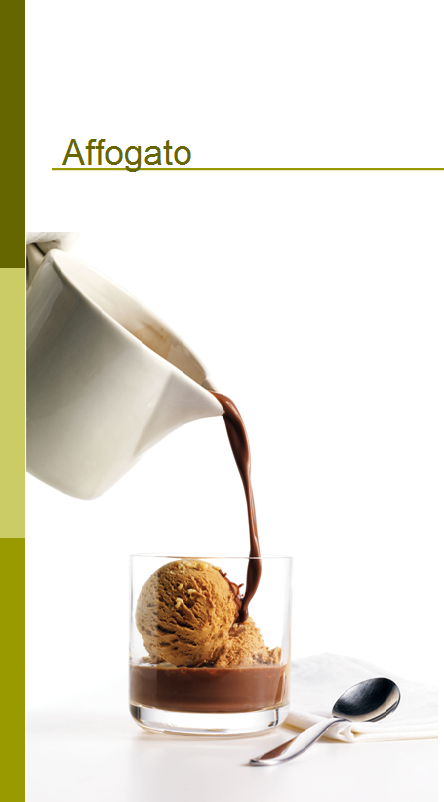 Among the many excellent mash-ups in the food world, one of the simplest and most blissful is the affogato, the marriage of two of Italy's finest exports, espresso and gelato